When I lived in London I used public transport a lot. Who doesn't? But for some reason, which I don't remember now, I started keeping my used travelcards in a box. I also asked Martina, my partner, for hers. As you can imagine, over the years we ended up with quite a collection. In fact, we had to buy travelcards until we moved to Clerkenwell late in 2006 because the station in Hackney, where we had lived before, didn't have Oyster card readers.

Stumbling across the box when we left London I had an idea: If there's post-it art, why not make travelcard art? I took a few years but now I've finally done it. The Travelcard Invader has arrived. 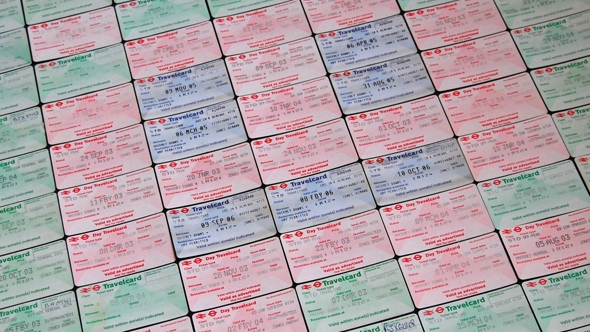 The Travelcard Invader. Apologies for not matching a classic Space Invaders sprite but despite the number of cards I had this wasn't possible. Click on the picture to see the full version.

By the way, while I was mounting the cards onto a cardboard for the background I couldn't help but notice how much they had cost. A quick bit of maths still made me gasp though:

Obviously, the prices are roughly guessed averages, so don't be fooled by the precision, but nonetheless it is safe to say that the travelcards used for this picture cost more than £3,000 over the years.