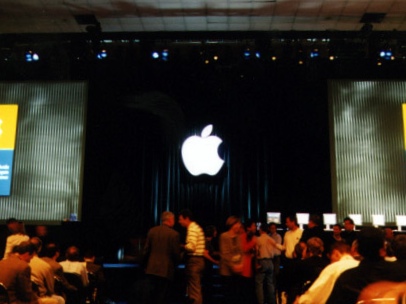 This year, the Java programming language is 20 years old. To mark the occasion, Michael Stal, editor of JavaSPEKTRUM, decided to publish a few anecdotes that we, the members of the content advisory board, would contribute. When I thought about what to write the hype around this year's WWDC was building up, reminding me of the following story.

It is May 2000. A few colleagues of mine and I sit in an overcrowded room at Apple's World Wide Developer Conference (WWDC), looking forward to session 407, to be presented by Rory Lydon. We're here because at our company we work with Apple's WebObjects application server, one of the very first application servers. Originally written by NeXT in Objective-C to be used with Objective-C it moved to Apple as part of the NeXT acquisition in late 1996 and was made Java compatible.

Rory is going to tell us what is going on in one part of Java land and his session has the title “WebObjects: EJB – Making the Best of a Bad Thing”. After an introduction he continues with a description of core parts of the EJB specification, and many in the audience, including myself, find hard to believe what we are hearing. Rory quotes from the specification, compares with the elegant solutions in WebObjects that have matured over years. We frown, worrying how our applications could be implemented with this EJB technology. The specification itself is the target and Rory mercilessly points out gaps and weaknesses. After further quoted passages from the specification the mood in the room brightens and, arriving at bean and container managed persistence, the first laughs can be heard. “This will never work in this form”, many seem to think.

Read the rest of this entry

In September Michael Tiberg invited me to give my Architecture without Architects talk at the excellent FooCafe. The talk was recorded and the video is available on Youtube.

So, I've just moved back to Europe after three fantastic years in Australia. One thing I'll miss for sure is living just a few minutes away from the beach, but on the upside I'm now in easy travelling distance to a lot of great conferences. The following is a list of conferences and gatherings that I'll be at, and in some case will also speak at. Hope to see you at one!

By the way, you've probably noticed that I updated the theme of this site to reflect my new hometown, Hamburg; the picture shows part of the town hall.

The JAOO conference is coming to Australia again, and I think it will be the best technical conference in Australia this year. (I admit that I'm somewhat biased as a member of the programme committee.) In the lead up to the conference we have organised what we call JAOO Nights in Brisbane, Melbourne, and Sydney. These are free events, starting at 5pm with two speakers presenting on topics that give a flavour of what the JAOO conference itself will be like.

Check out the JAOO Australia site for information on the sessions, and sign up for your city if your interested!

I've just spent an inspiring day at CITCON 2007, an open space conference about continuous integration and testing. Matching the occasion I have released the last (hopefully) beta version of CCMenu, my Mac equivalent of CCTray.

This is a good year for London. First, we saw JAOO come to London, in cooperation with InfoQ, and now we also get a our version of the No Fluff Just Stuff exchange, in cooperation with Skills Matter. I have heard a lot of great things about it and so I am really pleased that I can finally attend. And, before I forget, I will also give my advanced TDD talk. See you there.

The JAOO conference is one of my absolute favourites and this year I have the honour of hosting a track on enterprise application frameworks. As you might know I'm interested in a variety of development platforms and so I'm excited to have talks on Java and .NET frameworks as well as Ruby on Rails in this track. It is also a rare opportunity for me to be able to talk in depth about some of the work I've done: Mat Wall from the Guardian and I will present a case study on the development of the new Guardian.co.uk website.

Just back from this year's developer summit in Stockholm and despite being caught up in a strike of SAS for the second time in a month I had a fantastic time; and we even got a "superstition rebate". Read more about that on Beat's blog.

Dan North and I share many views, and we get on well. So, we've been toying with the idea of doing a joint talk for a while. Now, we've (finally) decided on a topic, namely How simple is too simple? which deals with the thorny topic of complexity in software; complexity inherent in the domain as well as self-inflicted complexity due to poor choices during development. First time we'll present this in public will be at ROOTS 2007, which is in Bergen, Norway.

JAOO is one of my favourite conferences and in partnership with InfoQ, which I also really like, the good folks at EOS are now hosting a conference in London for the first time. I am quite excited about this and now that the holidays in Patagonia have been postponed for a few weeks, I'll even be able to go. Expect to find one of my talks in the programme. (Edit: I will definitely run a tutorial on TDD with Martin Fowler.)

I enjoyed last years Symposium, both the one in Las Vegas and the one in Barcelona, quite a bit and will be back at the European one in Barcelona this year. (Had to skip Las Vegas due to timing issues this year.) Confirmed talks are the Visualisation talk Gregor Hohpe and I have given several times now, and a case study about the building of the new guardian.co.uk website. I am extremely pleased to co-present this with Matt Wall from the Guardian Unlimited.