At some point last year I was asked to review the architecture of the software behind a large and popular website. The resident architect explained how he had followed a modern approach, decoupling the web front-end from back-end services that provide content. To gain further flexibility he had put the front-end and the services on an ESB, mostly to cater for the possibility to make the content available to other consumers. In short, the architecture diagram looked a lot like many others: nothing to see here, move on. 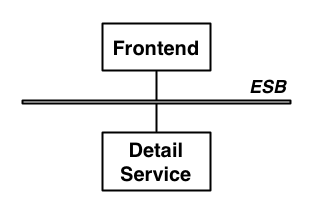 The diagram above only shows one of the content services, which for the sake of this article is a service that provides contact details for a person.

Based on conversations with the project sponsors I began to suspect that at least the introduction of the ESB was a case of RDD, ie. Resume-Driven Development, development in which key choices are made with only one question in mind: how good does it look on my CV? Talking to the developers I learned that the ESB had introduced "nothing but pain." But how could something as simple as the architecture in the above diagram cause such pain to the developers? Was this really another case of architect's dream, developer's nightmare?

Often a picture says more than a thousand words, but at the same time traditional architecture diagrams simply do not provide enough information. (I've argued this before, here and here for example.) The answer to my questions, and the anxious project sponsors' question whether the project would deliver on time, lay in a different picture.

The picture should not only show the layering of the system in more detail than the architecture diagram but it should also visualise the complexity introduced by the ESB. It's often possible to produce more detailed diagrams automatically from source code, configuration, or runtime inspection but in this case I couldn't find a way to do that, which is which I drew the following: 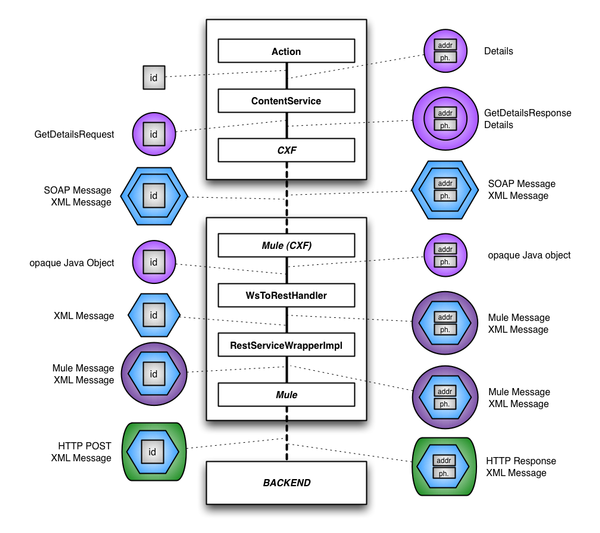 In the centre column this diagram shows the layers involved, from the Struts action that needs to look up details by an ID down to the back-end that provides a "RESTful" service to retrieve the details. The top box contains the front-end layers while the box in the middle represents the ESB. The layers labelled in italics are frameworks or infrastructure software, the rest is project-specific code.

Key to this diagram are obviously the coloured representations of data travelling up and down the stack. Primitive types are grey, Java objects are purple circles, XML documents are shown as turquoise hexagons, and HTTP messages as green blobs. Mule messages, which are Java objects, are shown in dark purple. If one representation is wrapped in another it's displayed inside the wrapper.

The diagram highlights that it's a simple piece of data that travels all the way down the stack (actually further until it hits a relational database at some point) and, equally, that the data needed by the action is available in the right form from the service. All that the intermediate layers are doing is wrapping and unwrapping the data in various ways. In fact, out of the four layers of project-specific code three layers do nothing but wrapping. No wonder the developers felt some pain.

As a side note: the diagram also makes it obvious that the wrapping is asymmetric between the WsToRestHandler and the RestServiceWrapperImpl, which makes the point of this layer boundary even more questionable.

This diagram made people more interested in the cost of what had just been a simple, innocuous line in the architecture diagram; which was the point of the exercise. So, what would this diagram look like without the ESB? Easy: 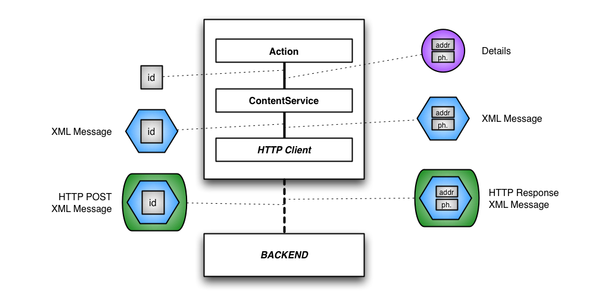 Apart for the obvious simplicity the diagram highlights that every layer has a purpose and there is only one wrapping, which is not undone either. Would it surprise you if I told you that the project went live without the ESB?

1) This article is by no means implying that any of the mentioned technologies are useless or harmful. Their use was harmful in this case.

2) The pattern of wrapping and unwrapping the same data through multiple layers is not new, it was also quite common in early 3-tier architectures. (In fact, some people called their architectures n-tier; I guess to show that the number of tiers was somewhat arbitrary but large.) We had a term to describe this pattern: the wormhole pattern.

3) This project is not an isolated incident of a Wormhole ESB. I have personally seen several in the past years.