The Spring framework has become ubiquitous in the Java world, and there are a large number of tools supporting developers of Spring-based applications. In this post I describe SpringViz; or, more accurately, my variant of it.

SpringViz helps developers with what is at the heart of a Spring-based application, the container and the contexts files that describe the beans. In larger projects these context files can grow quite a bit. Newer versions of the Spring framework introduced features that help reduce the clutter and there are vast numbers of blog posts voicing different opinions on what should and what shouldn't be in a context file but, no matter what, the number of beans in the context files will grow with the size of a project, and at some point it becomes difficult to understand the overall structure. This is no different from trying to maintain an understanding of a large codebase. In fact, I consider the context files to be code rather than configuration.

I've argued before (here and here for example) that to deal with the complexity and sheer size of software systems we need a 1000ft view. This is a view that uses visualisation techniques to aggregate large amounts of data and multiple metrics into one big picture. SpringViz provides that 1000ft view for Spring context files.

Let's look at an example first. The following diagram shows the context files for the Spring JPetStore example application (click on the image for the full-size version): 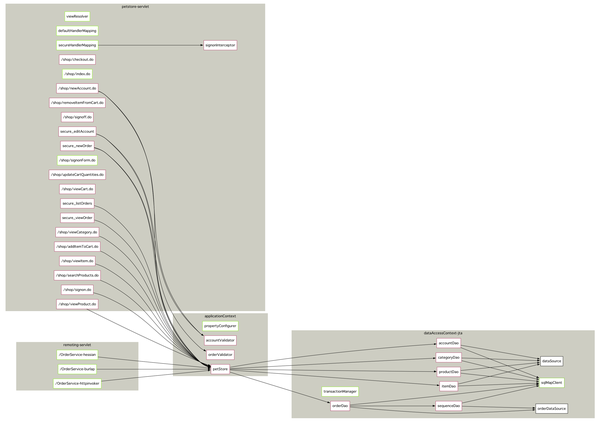 I find that this diagram presents the architecture of the application quite nicely. The web controllers are defined in the petstore-servlet context in the top left and many of them have a dependency on the petStore bean, defined in the main application context. The petStore bean in turn has dependencies on all the DAOs, which are defined in the data access context. In that context we can clearly see how the top four DAOs share the same data source while the Order and Sequence DAOs use a different one. In addition to the individual dependencies we also get an impression of the overall architecture: a simple, multi-layered design with a single central choke point that acts as an adaptor between the presentation and data access layers.

From personal experience I can say that the bigger and more complex a system gets, the more valuable these diagrams become. In many cases they not only help share a common understanding of the architecture in the development team but they also help spot inconsistencies in the design and often trigger and support discussions around important restructurings. Ok, this is all I'm going to say to convince you to try out SpringViz. In the following paragraphs I'll explain how to use it on your own projects.

Step 1: You need a copy of SpringViz. The version I'm discussing in this article can be downloaded here. When you unzip the archive you should have an Ant build file, a springviz folder with a few files in it and an example folder that contains the context files for JPetStore.

Step 1b: SpringViz uses GraphViz Dot to render the diagram. So, if you don't have this on your system you need to download and install it. You should also open the build file and change the dot.command property to point to the Dot executable. On the Mac you should really get Pixelglow's version of GraphViz.

Step 2: You can now run SpringViz by calling Ant with the default target. This will create a target folder, process the context files with the SpringViz XSLT sheet to create an input file for GraphViz Dot, and then invoke Dot to create beans.png, the final diagram.

Step 3: To integrate SpringViz into your own projects you can simply add the contents of the build file to your build file, place the springviz folder in an appropriate place, and adjust the configuration properties at the top of the build file.

If you are adventurous you can have a look at the Dot documentation and change the XSLT sheet to create slightly different input for Dot. You could colour the beans according to all sorts of criteria or you could change other aspects of their appearance depending on bean attributes.

There are a few limitations that you should be aware of: In its current version the system can't deal with multiple beans with the same name defined in different contexts. So, if you have a defaultUrlMapping bean or similar in multiple files and you have dependencies to/from these the resulting diagram will be wrong. In this case it's easiest to modify the style sheet to filter out the problematic beans. Another important point is that in its current form the sheet simply tries to use a bean's id and name, which usually works out but will cause problems when beans have both, name and id. And lastly, the XSLT processor will need access to the web to fetch the schema files. I guess this can be avoided but so far this hasn't been a problem for me.